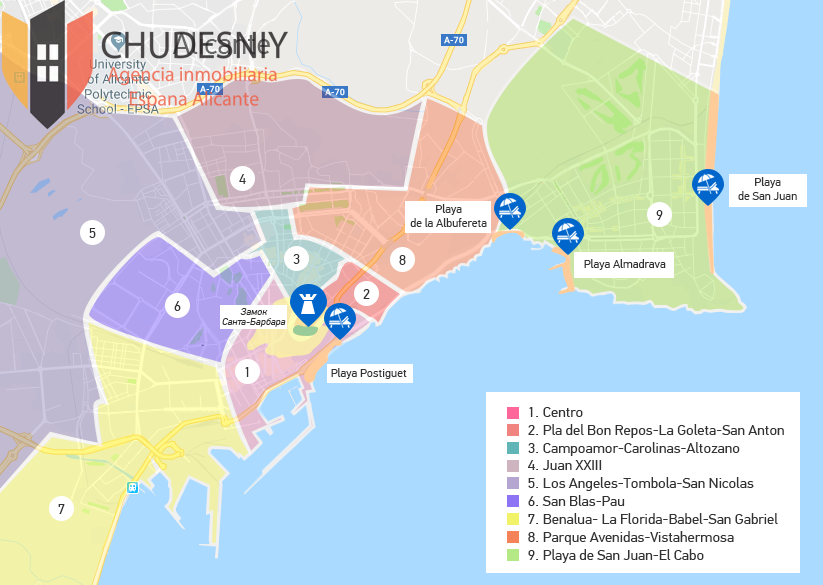 Description of areas of Alicante
Comments:0

Districts of alicante
Alicante is a tourist city that attracts people from different parts of the world, not only for recreation, but also for long stays. As the city expands every year, its districts are being added at an incredible rate. At the moment, there are 41 districts in Alicante.
We have identified 4 main areas that are well suited both for recreation and for life.
Diputación-Ensanche district
This part of the city is just a paradise for lovers of ancient Spanish architecture, combined with all the benefits of modern civilization. Supermarkets, restaurants, cafes and other institutions created for the comfort of residents and guests of Alicante perfectly fit into this area.
Also, this is one of the areas that are located near the popular city beach of El Postiguet and the most famous landmark of Alicante – the fortress of Santa Barbara.
Cozy shops and cafes give in the national style create a common Spanish atmosphere in Diputación-Ensanche.
Benalua District
Distant from the center of the city. During the tourist season there is an active life both at day time and at night. This area is very popular among tourists. The streets are built up with houses with small terraces and balconies, on which it is not always possible to fit together.
If the round-the-clock movement outside the window does not bother you, then everything is here for a full life and rest. Also, this area has a good road junction, so getting to every corner of Alicante is not difficult.
San Blas – Pau
Ideal for young families with children. Although initially this area was not designed and built for certain categories of people, but with time San Blas – Pau became “family”. Nobody objected and stopped him, because such places are also needed in any city.
What is this area liked the young parents? Since 2008, this part of Alicante has been in the best residential areas of Europe. After the crisis, the development of San Blas – Pau was frozen, but in recent years the city has once again returned to former glory and became the tourist capital of Spain, which had a positive effect on all areas.
There are more schools, kindergartens and playgrounds than in other parts of the city.
Every year thousands of children come here to have a rest, therefore in San Blas – Pau often there are holidays and themed children’s parties, attractions and animators work.
In this part of Alicante, the infrastructure is very well developed, so that a young mom with children will not have to run around looking for the right thing for her child throughout the city.
A significant advantage is that housing prices are much lower here than in other areas.
Vistahermosa District
Vistahermosa is considered an area for the working class. When building this part of the city, at one time the authorities allowed to build up this area with one-storey and two-story houses. Of course, there are several high-rise buildings here, but they do not in any way spoil the beauty of the area.
In general, Vistahermosa can hardly be called “working.” It looks more like an elite cottage town. It is very quiet and safe here. The road has markings for both motorists and cyclists.
On every street there are playgrounds and green areas for pedestrians. Watering plants is carried out exclusively with purified water.
This area is considered exemplary in Alicante. But there is only one drawback. On weekdays, traffic jams on Vistahermosa are possible in the morning, as residents leave for work in other areas. Apparently, therefore, it refers to the “workers”.
These are just the four most famous areas of the city. But it can be said with confidence that in Alicante everyone will find a comfortable place for themselves. 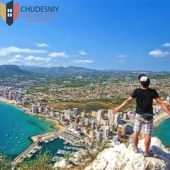 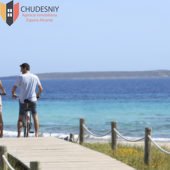